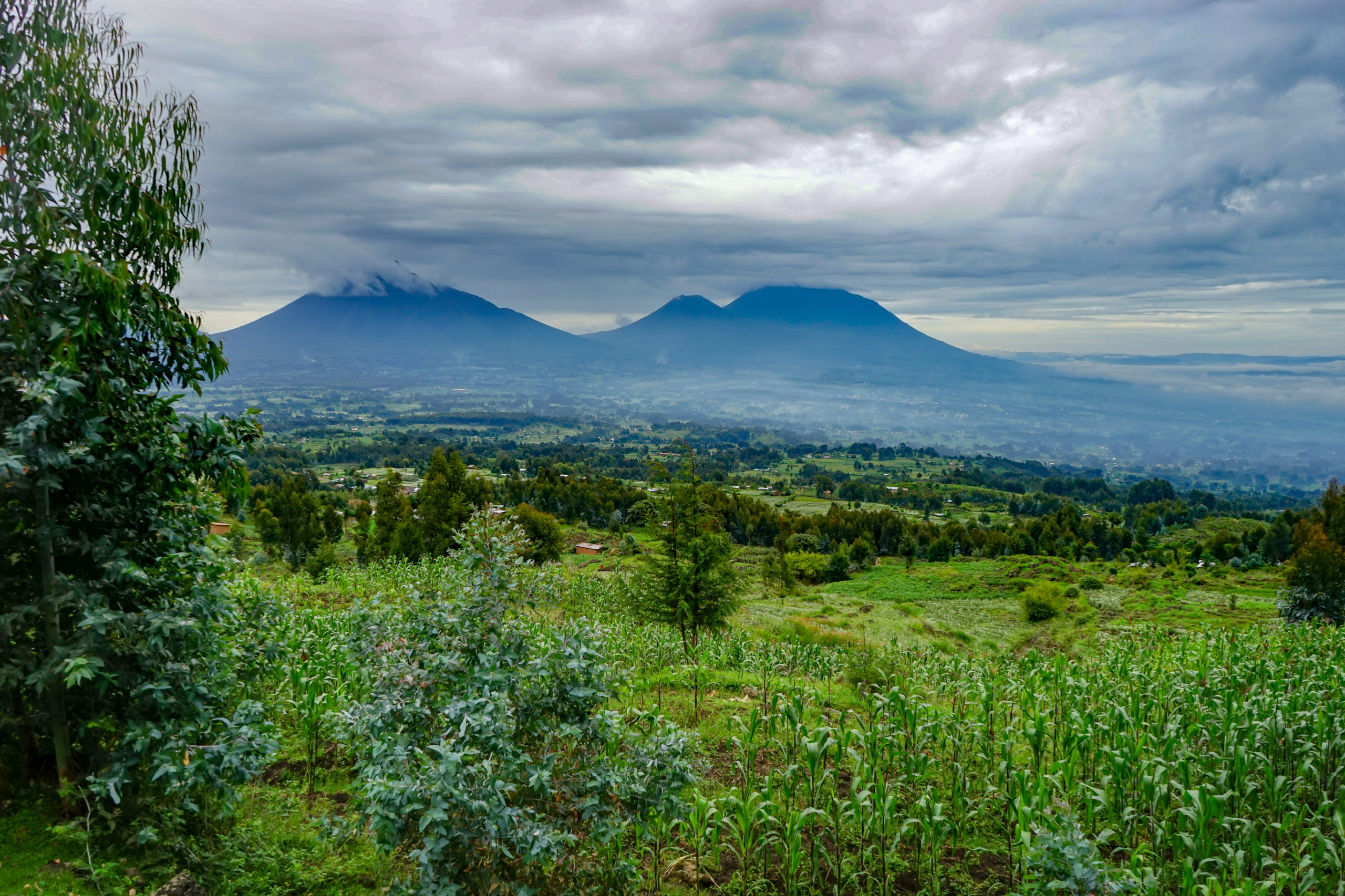 One of the best reasons to spend time in East Africa is the chance to explore Rwanda’s National Parks. Looking to see how to make the most of your trip?

In the heart of Central Africa, so high up that you shiver more than you sweat,” wrote the eminent primatologist Dian Fossey, “are great, old volcanoes towering almost 15,000 feet, and nearly covered with rich, green rainforest – the Virungas.”

Situated in the far northwest of Rwanda, Volcanoes National Park protects the steep slopes of this magnificent mountain range – home of the endangered mountain gorilla and a rich mosaic of montane ecosystems, which embrace evergreen and bamboo forest, open grassland, swamp and heath.

Volcanoes National Park is named after the chain of dormant volcanoes making up the Virunga Massif: Karisimbi – the highest at 4,507m, Bisoke with its verdant crater lake, Sabinyo, Gahinga and Muhabura.

Tracking endangered mountain gorillas through the mysterious intimacy of the rain forest, alive with the calls of 200 species of colorful birds and chattering of the rare golden monkey, is only one of the truly unique experiences in the area.

Within the boundaries of Volcanoes National Park are Buhanga Eco-Park, an ancient forest holding Rwanda’s most intriguing folklore and Musanze Caves, formed 62 million years ago after the last estimated volcanic eruption.

The relatively warm and low-lying plains of Akagera comprise savannah, woodland, wetland and a dozen lakes. In partnership with African Parks, we aim to transform the National Park into a world-class location to experience a safari.

The largely open expanse is ideal for game viewing, and we are taking steps to ensure the Big Five roam the park in greater numbers over the course of time.

Since 2010 we have cut poaching to an all time low, with the introduction of a helicopter, a canine unit and rhino trackers.

A family of lions from South Africa is settling in well, and breeding successfully, and 18 eastern black rhinos have also been reintroduced.

A boat trip on Lake Ihema is also a highlight of any visit to Akagera, with its large pods of hippos, Nile crocodiles and abundant waterbirds on the island in the middle of the lake.

The only way to explore the park is by vehicle, whether through a tour operator or self drive. The National Park also has a vehicle to hire, with individual spaces available on night drives.

It is recommended to take up the services of a guide, which can be booked through the park.

Sleeping within the park is possible, at various lodges, a bush camp in the north at select periods, or camping in specific sites.

One of the oldest rainforests in Africa, Nyungwe is rich in biodiversity and spectacularly beautiful. The mountainous region is teaming with wildlife, including a small population of chimpanzees as well as 12 other species of primate, including the L’Hoest’s monkey endemic to the Albertine Rift.

With 15 trails, some of which are detailed here, along with various other activities, visitors can choose to sample the delights of the forest or indulge themselves for a week or more in one of Africa’s most stunning forests.

Primate tracking tops most visitor’s list, but it’s worth lingering a little longer for those with time to relax and take in the primal atmosphere.

Botanists will marvel at the 1,068 plant species and 140 orchids. The birdwatching is among the best in Africa with 322 birds species including Red-collared Babbler and 29 other Albertine Rift Endemic species. Butterflies are also a common sight, with at least 120 species.

There are 75 known mammals in Nyungwe, such as the cerval cat, mongoose, congo clawless otter and leopard to name but a few. Many tend to be shy so sightings are luck of the draw.

Memorable and photogenic moments include walking up to the Isumo waterfall or along the Canopy Walk suspension bridge. Tea plantations border the edges of the park, with a habituated troop of Ruwenzori colobus monkeys at Gisakura as well as forest fringe birds.

With plenty of rainfall, Nyungwe is also the major catchment area in Rwanda, and supplies water to 70% of the country.

Rwanda’s fourth national park, Gishwati Mukura is made up of two separate forests – the larger Gishwati and small Mukura, forming a total of 34 square kilometres plus a buffer zone.

The forests sit on the ridge which divides the Congo and Nile water catchment areas, along the incredibly biodiverse Albertine Rift in the west of the country. It is made up of 60 species of tree, including indigenous hardwoods and bamboo.

Gishwati is home to a group of 20 chimpanzees which live alongside golden monkeys, L’Hoest’s and Blue Monkeys. Birds are well represented too, 232 species have been seen at Gishwati and 163 at Mukura, among them Albertine Rift Endemic species and forest specialists.

The park is currently part of an ambitious landscape restoration program. Activities in the park are due to begin in 2019 and include a guided nature hike, guided chimp and monkey tracking, bird watching and a visit to the waterfalls.

The area was nearly depleted largely due to resettlement, illegal mining in the mineral-rich forest and livestock farming.

The formalisation of its National Park status in 2015 aims to help redress the balance, to increase the number of trees to improve soil fertility, stabilise slopes and regulate stream flow.

It will also contribute to improving the livelihoods of the population living in the surrounding areas, which in turn offers the forest a better chance of regeneration in tandem with the potential to raise living standards in the longer term.

Community-based activities include a farm stay, a live cultural dance, making handicrafts, beekeeping, a tea plantation tour and the chance to learn from traditional healers, who use natural plants to support modern medicine and synthesised drugs.

Everything to know about Uganda National Parks

What to know about the East African Community